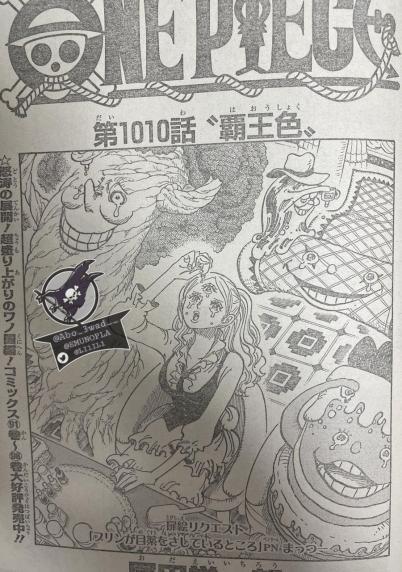 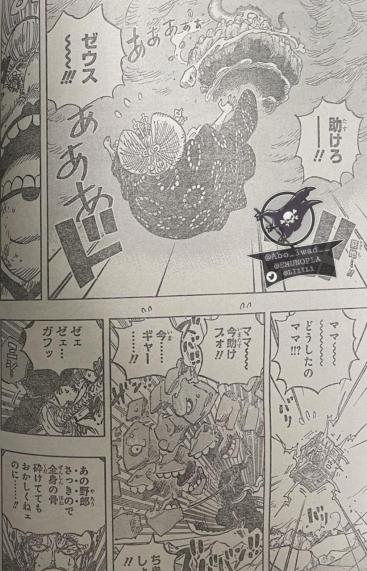 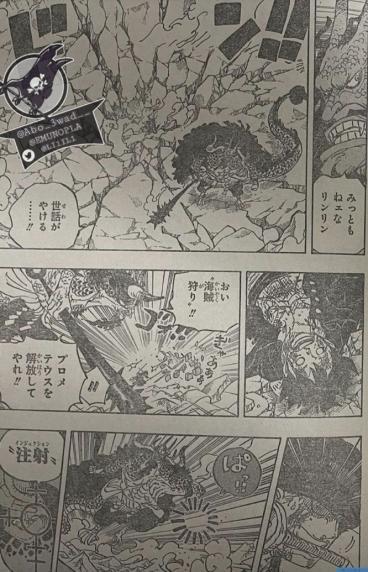 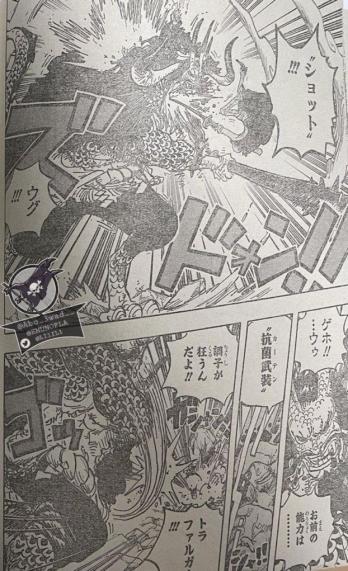 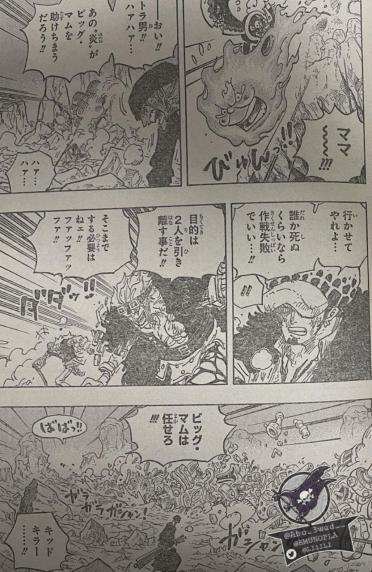 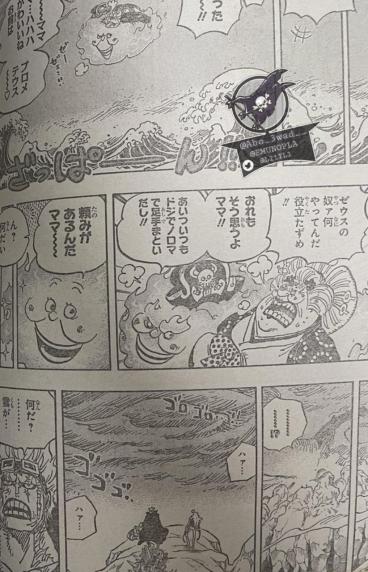 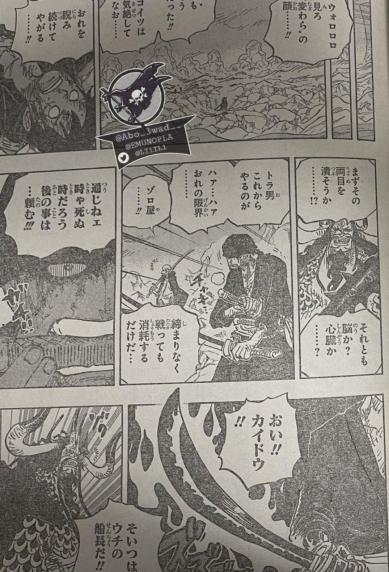 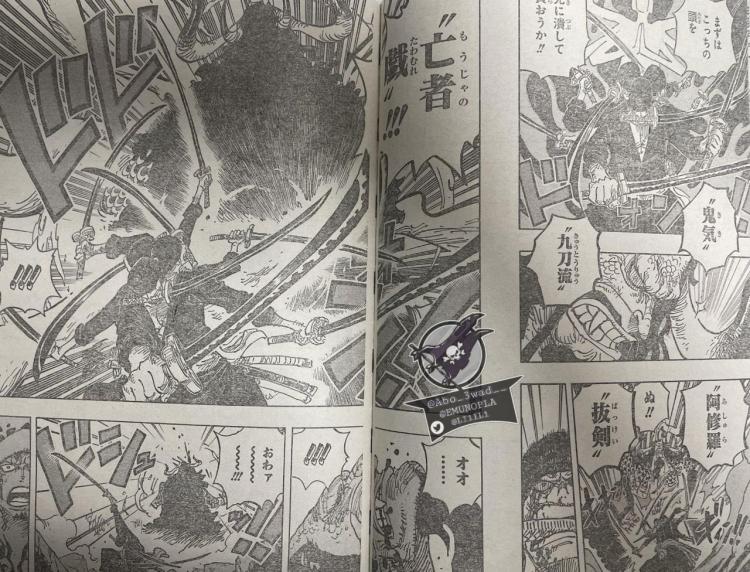 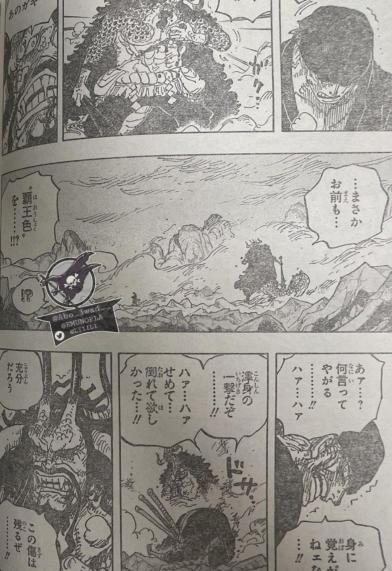 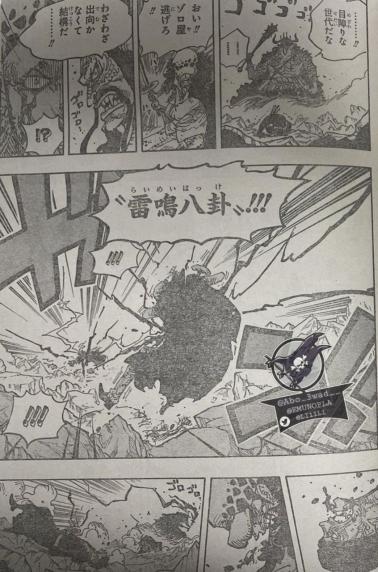 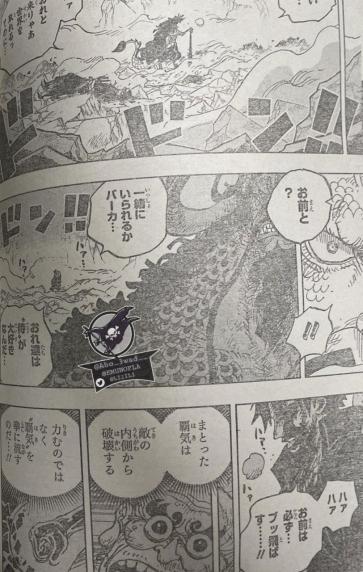 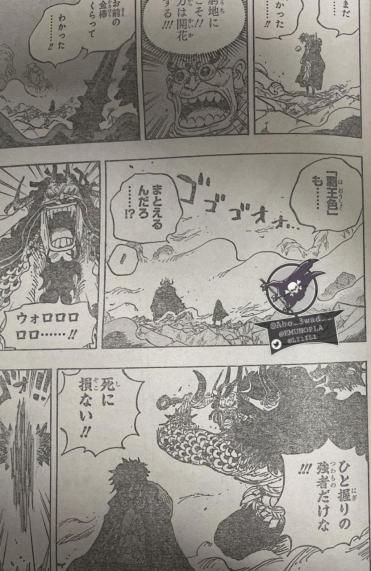 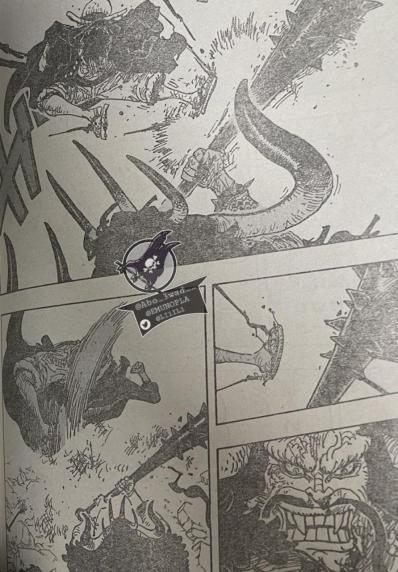 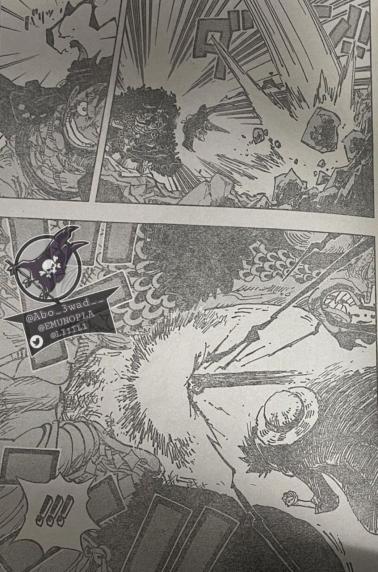 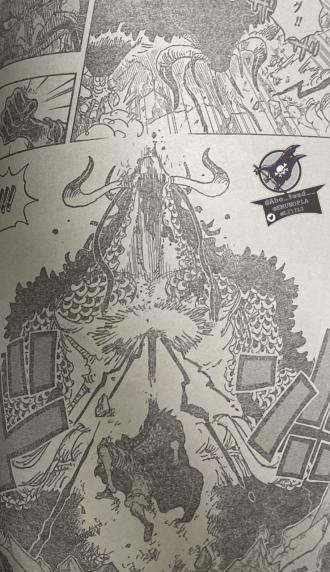 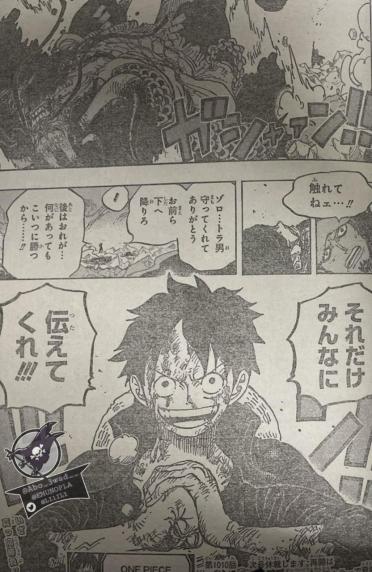 Full summary, thanks to redon from Arlong Park Forums.

In the cover, Pudding and her homies are using eyedrops.

Zoro is cutting Prometheus into so many pieces that it can’t help Big Mom. Law comments how crazy Zoro is, saying that he wouldn’t be surprised if every bone in Zoro’s body is already broken.

Kaidou: “Damn! That pathetic Linlin… Now I’ll have to help her too!!”

Kaido attacks Zoro (calling him “Pirate Hunter”) and orders him to let Prometheus go to help Big Mom. Law warps Zoro out of the way and appears right in front of Kaidou. Then he shoots his “Injection Shot” right at Kaidou’s neck, making him cough up blood.

Kaidou attacks Law with his kanabou. Law uses a new technique called “Curtain” (抗菌武装 (カーテン)) to defend himself but Kaidou blows out of the way.

Kaidou: “How troublesome is your ability, Trafalgar!!”

Both Prometheus and Napoleon use this chance to jump down to save Big Mom. Zoro complains why Law helped him since it allows the homies to go help Big Mom.

Law: “Just let them go. If someone has to end up dying because of my plan, I’d prefer my plan fails.”

Kid says this is more than enough already, since the goal was just to separate the 2 Yonkou from each other. Kid and Killer then run towards Big Mom’s direction, saying that they will take on Big Mom themselves.

Cut to below the island. Prometheus saved Big Mom right before she hits the sea. Big Mom praises Prometheus then complains how useless Zeus is. Prometheus says Zeus has always been slow, stupid and just a burden for Big Mom.

Prometheus: “Mama, I have a request.”

Cut back to Kid and Killer. They stop at the edge of Onigashima. Kid comments how there’s something weird going on with the clouds…

Back to Onigashima’s rooftop, Luffy is unconscious with his eyes turning white. Kaidou laughs, then says that it’s just like last time. Even after passing out, Luffy wouldn’t stop staring at him. Kaidou wonders whether he should crush first, if Luffy’s eyes, brain or heart.

Zoro tells Law that the next attack he uses would be the last thing he can manage to do. If it doesn’t work, then he’s going to die so he’s leaving the rest to Law.

Zoro: “Hey Kaidou! That guy is our captain. If you wanna crush him, then crush me first!!”

Kaido is struck by Zoro’s attack with lot of blood coming out.

Zoro: “What the hell are you talking about… I have no idea myself…”

Then Zoro falls to the ground.

Zoro: “I gave everything for this attack. Too bad it can’t manage to bring Kaidou down…!!”

Kaido: “You did more than enough. This is gonna leave a scar!!”

Kaido is about to finish off Zoro with his kanabou. Law attacks him but he and Zoro are blown away by Kaidou’s “Raimei Hakke”.

Kaidou: “It’s such a shame. If you all come with me, we’d have taken the world together!!”

Suddenly, Kaidou hears Luffy’s voice from behind him.

Luffy: “With you? We would never want to go with you. We all love “samurai”, you know?”

We can see a little flashback to when Hyougorou teaches Luffy not to just force Haki out, but let it flow to his fist and into enemy’s body.

Hyougorou: “Your power will bloom in the time of crisis!!”

Luffy: “My attacks were still too shallow… But after taken you kanabou, I now understand. “Color of the Supreme King” can be used to “cover” yourself as well!”

Kaidou: “Worororororo…!! It’s true, but only a handful of people can manage to do that!!!”

Kaidou attacks Luffy again but Luffy blocks the kanabou with his feet without even touching it. There’s lot of black thunder coming out from around his feet. Luffy then jumps at Kaidou with black lighting around his fist. He then hits Kaidou’s stomach and chin (without touching him) until Kaidou hits the ground.

Law: “They aren’t even touching…!!” (He uses the same phrase Oden said when he saw Roger and Whitebeard clashed).

Luffy: “Zoro, Torao… Thank you for protecting me until now. Both of you can go downstairs now!! Tell the other… that no matter what happens, I will win!!!”

End of chapter, break next week. One Piece will be back with Jump cover and Color Spread (probably with 7th japanese Character Popularity Poll results).

Zoro tells Law that this attack is the best he can do so if this doesn’t work, it’s up to him.

Zoro attacks Kaido with it.

“Kaido: “You also have King’s haki?” (Some dialogue omitted by the provider).It’s no surprise that this attack will leave a wound.”

-Sanji will maintain the balance of the world

-Sanji will fusion with a mythical fiery bird* not obeying orders

*by obtaining new fruit / new suit depends on the translation

From oda’s draft and conversation between Oda and his editor

You are reading One Piece Chapter 1010 Spoiler and Raw.

Read One Piece Chapter 1010 Spoiler and Raw on MangaHype.com for free.